Exactly why St Valentine is so closely associated with epilepsy is not known for sure. By some accounts, St Valentine was said to have had the condition himself. Other theories propose that his association is the result of having freed people from seizures and curing epilepsy. Other contributors have pointed to the phonetic similarity between the German word for “fallen” and “Valentine”(Epilepsy used to be known as the falling sickness). There are few historical records of St Valentine however and some experts even claim that St Valentine as we know him is actually the amalgamation of two or more saints from early Christian times.

So while we cannot be sure of the exact reason for St Valentine’s link to epilepsy, we do know that the link has been reinforced by Christians throughout the ages ever since February 14th was declared to be the Feast Day of Saint Valentine as far back as 496AD.

For example, in parts of Europe, common names for epilepsy have included “Saint Valentine’s illness” and “St. Valentine’s affliction”. There are also hundreds of iconic representations (pictures, sculptures) existing today from the 15th century onward of St. Valentine healing people with epilepsy, particularly in Germany, Switzerland, Austria and Italy. They often show the Saint with an adult or a child having a seizure or recovering from a seizure.

St Valentine is also often represented by the symbol of the Rose. Every year, Epilepsy Ireland marks St Valentine’s connection to epilepsy through our Valentine’s Roses fundraising appeal.

Of course, there is an even stronger link to Ireland. The alleged remains of St. Valentine have been kept since 1836 in a Shrine in Whitefriar St Carmelite Church in Dublin, between Aungier Street and Wexford Street. Celebrations and special masses are held at the Church every St Valentine’s Day to celebrate the feast day. 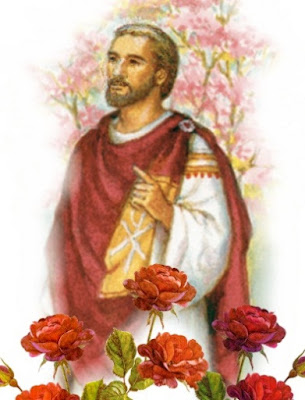